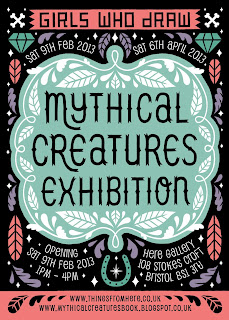 For our latest Girls Who Draw exhibition, we will be unleashing an array of fabulous beasts and beings to fill the windows and walls of Here Gallery in Bristol. The show accompanies the Mythical Creatures postcard book and will include a selection of prints and original artwork from the book as well as new pieces created especially for the gallery.

The exhibition line-up features a range of emerging and established female illustrators from around the UK and different characters from myths, legends and folklore. Amongst them will be Wood Troll and Firebird screen prints by Ruth Green, Wear Wolf and Flying Fox prints by Sandra Dieckmann and drawings of Imaginary Beings by Sarah Lippett. Lee May Foster-Wilson will be exhibiting her Pegasus and mermaid paintings which were originally created for the postcard book. Some of the exhibitors have also made Mythical Creatures inspired products and craftwork such as Kate Hindley’s Ratatoskr cushions, Yee Ting Kuit’s Gnome and Unicorn brooches and Beth Morrison’s hand drawn, wooden figures of Bigfoot and Brownie the helpful elf.

As part of the exhibition there will be a small showcase of self-published books from some of the exhibitors including mini comics by illustrator Kristyna Baczynski and screen printed comics and zines by print-makers Esther McManus and Helen Entwisle. And as if that isn’t enough, Karoline Rerrie and Print Gocco Queen Xtina Lamb will be printing, cutting and sticking to produce a large scale installation in the windows of Here Gallery.

First Misfits, then Menagerie followed by Magic. Now Mythical Creatures is the fourth limited edition postcard book by Girls Who Draw. Only 1000 copies have been printed and the publication has a new, larger format, with each book containing 24 postcards featuring a new line-up of 12 female illustrators from around the UK.

Each illustrator has created two original postcard designs based on the theme of Mythical Creatures. There are 22 different characters from myths, legends and folklore as well as some characters which have been created especially for the book.

The Mythical Creatures book cover is unmistakably the work of Kristyna Baczynski. It has all the characteristics of her unique style; beautiful hand drawn lettering combined with illustration and pattern. She has decorated the cover with a selection of icons which give clues to some of the Mythical Creatures inside and the tales with which they are associated. As well as Kristyna, other new contributors to Girls Who Draw are Esther Mcmanus, Lee May Foster-Wilson, Mina Braun and Sandra Dieckmann. There are also plenty of familiar names including Beth Morrison, Currentstate (aka Jane Anderson), Gemma Correll, Karoline Rerrie, Kate Hindley, Ruth Green and Yee Ting Kuit. The illustrators are joined by an array of weird and wonderful creatures including a flying fox, a wear-wolf, bigfoot, a gnome and a unicorn, some trolls, several sirins, a selkie and a kelpie, a firebird, Pegasus and a mermaid, to name but a few.

As well as including a variety of characters Mythical Creatures has been curated to encompass a wide range of illustrative styles from paintings to intricate drawings and from screen prints to digitally created images. The contributors also have different areas of expertise including children's books, graphic novels, greetings cards, printmaking and design. Many have been brought together through participating in self-publishing fairs and events, and through creating their own fanzines, artists' books, comics and graphic novels. But all of the illustrators involved in Mythical Creatures design, make and sell their own range of products be it stationery, prints, textiles, jewellery or even ceramics.

Over the last few years Girls Who Draw has grown from a small group of illustrators to a larger network of contributors. They collaborate in order to publish a postcard book once a year and each new book is accompanied by an exhibition. Alongside the Mythical Creatures postcard book there will be at least one exhibition as well as a number of smaller spin off projects and collaborations.
Posted by Karoline Rerrie at 05:44 No comments: 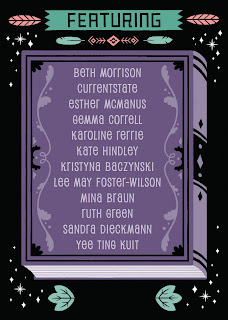 The Mythical Creatures postcard book has a different lineup from the previous Girls Who Draw publications. Although the book features some familiar names, nearly half of the contributors are new to the project. They have played an important role in the production of the book and in some cases were the inspiration for it. They are Esther McManus, Kristyna Baczynski, Lee May Foster-Wilson, Mina Braun and Sandra Dieckmann. And here is a little more information about them...

Posted by Karoline Rerrie at 05:43 No comments: 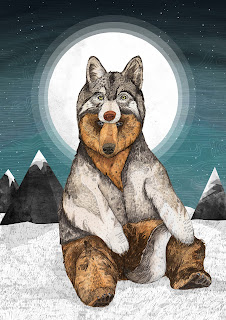 Sandra Dieckmann lives and works as a freelance illustrator and artist from her studio in East London, UK. Her skills have been applied to a wide array of international commissions and projects. In 2011 Sandra won an award for Upcoming Talent in Illustration in the UK for her image Fox Tree.
Sandra is represented by Jules Beazley Represents. 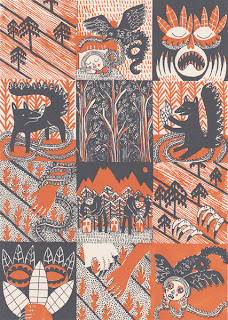 Esther McManus is a printmaker who draws comics. Her screenprints and drawings have a strong sense of narrative, and her stories are inspired by woodlands, folklore, sorcery and the dreamscape. More of her work can be seen on her blog esthermcmanus.blogspot.co.uk

The Mythical Creatures postcard book is the first Girls Who Draw collaboration which Esther has been involved in. The theme was actually inspired by her illustrations and the book would not have been complete without her. Hopefully Esther will contribute to more publications in the future. 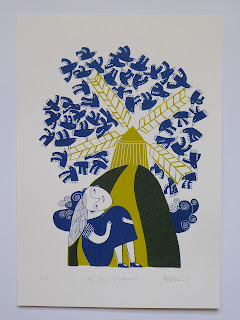 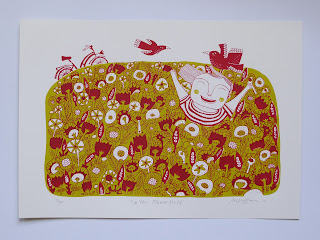 Mina Braun is originally from Germany, where she studied at the Kassel Academy of Art. After moving to Scotland in 2003, she completed a BA and then a Master degree in illustration at the Edinburgh College of Art. Mina is passionate about drawing and printmaking. Her work is strongly motivated by visual storytelling and takes its inspiration from themes relating to childhood and nature, particularly from the transitional realm of folklore and fairy tales. Reflecting on the notion of entering a different world, her characters often appear to be in a dream-like state: sleeping, flying with closed eyes, or transforming into animals or trees. She currently works from her studio space in Morningside and the Edinburgh Printmakers, where she creates her screen prints.

Mina took part in the Girls Who Draw Magic Show exhibition at Solihull Gallery in 2011. She also created two drawings especially for the Magic zine and colouring book which was published to accompany the exhibition. But Mythical Creatures is the first Girls Who Draw postcard book which has featured Mina's illustrations. Her work is perfect for the theme and, as with Esther McManus, the book would not have been complete without Mina's contribution. 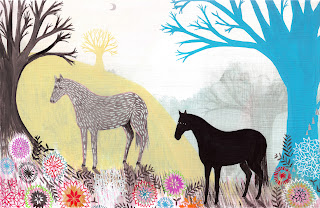 Lee May Foster-Wilson is an artist and designer who sells her screen printed clothing, illustrated jewellery, accessories and home wares under her label Bonbi Forest. As well as drawing too many horses, cats and trees, she likes to explore the patterns, rhythms, narrative and the connection of people to nature in her paintings and drawings. She then turns her artwork into vibrant textile and jewellery designs for Bonbi Forest.

In the past Lee May has worked with Bat For Lashes, Dan Le Sac vs Scroobius Pip and Urban Outfitters and her jewellery and clothing has been seen in Grazia, Look, Marie Claire and The Independent amongst others.

The Mythical Creatures postcard book is the first Girls Who Draw collaboration Lee May has been involved in. She is known for her beautiful equestrian themed designs and her painting of Pegasus is instantly recognisable. Both Lee May and her Pegasus are an essential part of the Mythical Creatures themed book and future exhibitions.

Posted by Karoline Rerrie at 11:24 No comments: